Okaaay, so yeah, I’ve been away and hadn’t posted anything for ages. One, didn’t feel like talking (typing) much, and two, self issues. Or I think that’s just the same thing. So any who, I’m here now. 🙂 And I have more than a dozen (again) draft posts, in which I’ll be posting all today, or tomorrow, as best I could. But anyway I update my Instagram (almost) daily, probably coz I can just post there straight from my phone. So if you wanna find me there…

So let’s get started then. Here’s a mani I did for the April nail art challenge, matching OOTD (Outfit of the day). Though I was just staying home and my outfit was just tank top and shorts, so nothing really fab, I still managed to be inspired somehow by the shorts I was wearing. Lol

It’s actually my first attempt on doing one-stroke flowers on my nails, and as you can see they kind of look…different. I tried to do one-stroke technique like a month or so ago, but on paper, and it seems easy. But heck no, it’s totally different when done on nails, the “canvas” is smaller making it harder to move the brush around. And I think I did had (slight) stiff neck after doing this mani. Oh and by the way, that’s no where near “one”-stroke flowers. They’re more like a gazillion-strokes. Lol

Base polish is San San – Cloudy Gray. Acrylic paints for the white and blue.

So of course, a photo showing my shorts. Well the design on my shorts. I know I know, they don’t really look the same. But at the time I was already tired, and that’s my excuse. 😀 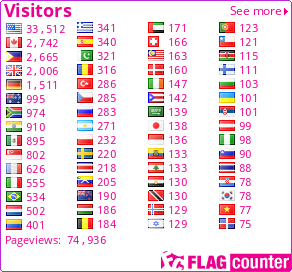 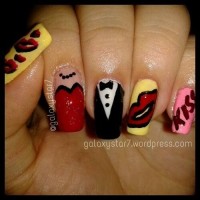